In this article, I will write an article on the theme of “Spirited Away” analytics and commentary by Studio Ghibli.

Of course, each person’s thoughts and interpretations are fine.
It’s a subjective interpretation at best, and I think this is what Hayao Miyazaki is trying to convey. I will interpret it from my point of view.

I would like to help you with your thoughts and interpretations, at the very least.

Chihiro, the main character, is NOT typical of Miyazaki’s films. 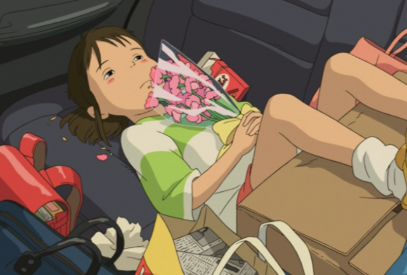 Chihiro, the main character, is selfish and bites the tongue and complains to her parents a lot, which is not typical of Miyazaki’s films. A typical city-raised only child.

first of all, “Spirited Away” originally started out as a project called “Entotsu Gaki no Rin（Chimney Painter Rin）

Producer Toshio Suzuki had this to say about the content of the film.

Set in Tokyo after the earthquake, the story is about a 20-year-old girl who paints a picture on the chimney of a bathhouse. The girl gets caught up in a conspiracy, and a chaotic uproar ensues. The boss on the other side is a 60-year-old man.

As we talked to him, the old man was Hayao Miyazaki himself. Then, as if by chance, the two opponents fall in love beyond their years…

It’s a story about a pedophile.

Whether it’s “Lupin III: Cagliostro’s Castle” , “Porco Rosso” etc…Miyazaki’s films tend to have an old man’s paranoid pattern of “an immature girl who falls in love with a middle-aged man.（That’s why Hayao Miyazaki is often rumored to be a pedophilia by Anti-Ghibli）

Hayao Miyazaki furiously drew storyboards to develop his images, but in the end he gave up on “Rin the Chimney Painter” due to Suzuki Toshio’s objections.（Thank you Suzuki!!!）

The idea that came up instead was to “make a movie about Chiaki.”

Chiaki is the daughter of Okuda Seiji, who is in charge of Studio Ghibli at NTV’s Film Department.

The family has known each other since she was a baby, and Miyazaki seems to have had a lot to think about the way modern parents, including Chiaki’s parents, treat their children.

”What will become of Chiaki if I leave it to those parents…? ”

This is where the concept of Spirited Away began.

I can’t deny the feeling of unnecessary meddling, but I think he wanted to convey through the film that “even pre-pubescent children have to survive in this world independently from their parents”.

Therefore, the main character, Chihiro, was not designed as a special beautiful girl, but as an ordinary girl who seems to exist anywhere in the same generation as them.

No matter how spoiled a child is today, he or she will be able to overcome difficulties by himself or herself when push comes to shove.

This message became known when a fan of the film sent a question to Studio Ghibli about the film’s message, and Ghibli sent an official response directly to the question, which was then published on social media.

Spirited Away was born out of Miyazaki Hayao’s sense of social responsibility.

The meaning of the scene where your parents turned into pigs 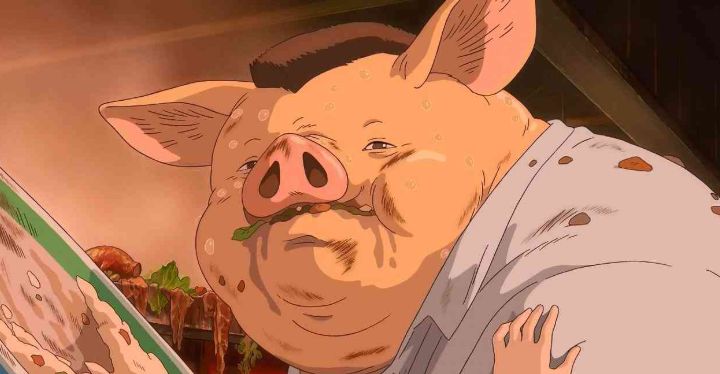 When I started watching this movie, the first scene that struck me was this scene.

I saw this movie when I was in elementary school, and it was almost traumatic.

What message does this shocking scene have in store for you?

I think it’s about “brainwashed adults” who swallow false information without questioning it.

A pig is a typical domestic animal.
Domesticated animals are tamed by people and for people.

Most adults have been brainwashed and domesticated as they live in this society. (I’m sorry to be so harsh.)

In other words, they have been brainwashed and “tamed” to work for the convenience of those at the top of society, to work for them, to not question them.

We, as adults, easily believe false information that a child could easily judge to be insane.

I think that’s what Hayao Miyazaki wanted to convey first.

He wanted to convey the message that society is full of insane, and we are all brainwashed, and to convey the fact that we are being tamed and domesticated by society without realizing it.

What does “name taken” mean? 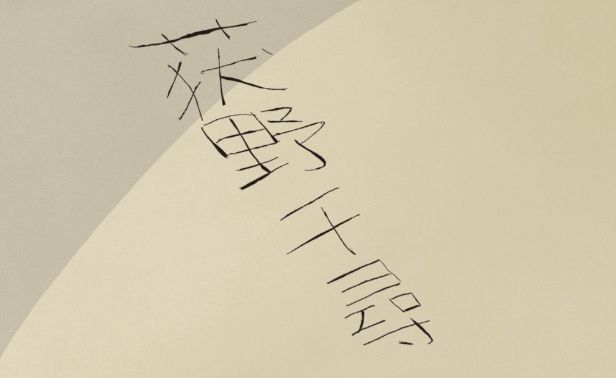 Haku: “Yubaba takes the other person’s name and controls them. you pretend to be Sen all the time, but keep your real name well hidden.

Haku: “When Yubaba takes your name away from you, you don’t know how to get home. I can’t remember for the life of me.

In this film, the expressions “you can’t forget your name” and “if Yubaba takes your name, you’ll never get out of this environment for the rest of your life” often appear.

What does this “name being taken” imply?

Having your name taken = making you forget what you were born to be.

In my opinion, this means that.

A name is a person’s identity, individuality, and the feelings of the parents who named it.
In other words, a name contains the meaning of one’s birth.

There is a system in this society that makes us forget what we were born to do while we are living hard to fit into society.

As we try so hard to live for money, to live, to protect our families, to not deviate from the common sense, it makes us forget the important thing of “who I am and what I want to do”, i.e. “what I was born to do”.

I think that’s what Hayao Miyazaki wanted to convey.

Why is there a brothel theme? 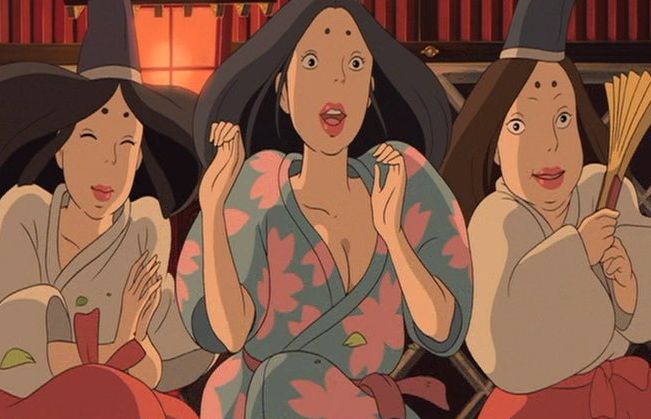 “It’s Japan itself. It was like the employee rooms of the yuya where Chihiro lived. Japan was like that until a little while ago.”  by Hayao Miyazaki

Director Hayao Miyazaki made these comments in an interview.

What the hell is a Kaonashi? 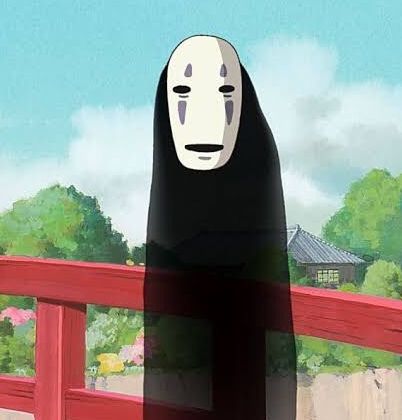 There are a lot of KaoNashi around. I’m sure there are people everywhere who want to get together with someone like that, but don’t have themselves. by Hayao Miyazaki

As the name implies, the Kaonashi seems to describe itself as a “personality-less” being.

In fact, when Chihiro asked him about him, Kaonashi looked quite troubled. Because of the “lack of self” and the “lack of a place for myself”, I think he tried to gain a personality by feeding off the desires of others to get into himself.

Kaonasi often tried to give Chihiro money, but she kept refusing.

From this act, some believe that the kaonashi is a “symbol of desire”. And, given the series of exchanges and the fact that the gold sand eventually turned to mud, there may be a theme of “there are things that money can’t buy” in this film as well.

When Chihiro finally looks for her parents among the pigs, how did she know they weren’t among these? 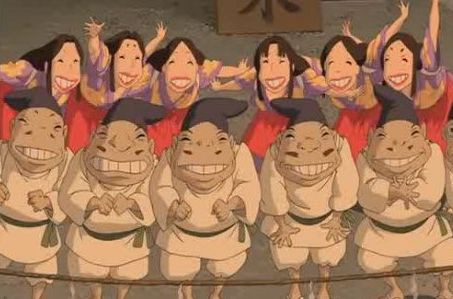 As a condition for Chihiro to return to her original world, Yubaba was told to find Chihiro’s parents from among many pigs, and Chihiro finds out that the pig has no parents.

How did Chihiro find out that there was no father and mother among the pigs?

I think it’s because Chihiro’s brainwashing (magic) has been broken by overcoming many challenges and growing up.

There is brainwashing in this society and all adults, large and small, have been brainwashed.

The way to solve it is a “challenge”.

By having a purpose, challenging yourself, failing, and reflecting, you will be able to realize the wrong information (the parts of you that have been brainwashed) inside of you.

Then, by becoming aware of the wrong information and getting rid of it, you can live free from brainwashing and have an ideal life.

Chihiro regained the name that Yubaba had almost stolen from her, and continued to have the goal of “returning to the original world” regardless of the common sense of the environment that Yubaba created, and through many challenges and failures, Yubaba’s brainwashing was broken.

In other words, I got back to “who I am and what I want to do.

Because Chihiro was liberated from brainwashing, she must have realized that “obviously, there are no parents here” when she saw a lot of pigs.

I think that’s what Hayao Miyazaki wanted to convey.

Then, here’s a question.

So why didn’t we, the movie-viewing audience, understand that “there are no parents in that”?

No matter how hard we looked at that scene and saw the pigs in line, we, the audience, could not have spotted the real parents.
It doesn’t even portray anything like a hint to find out.

The reason we couldn’t see it was because “we’re all brainwashed”, which is a satire and a black joke in Miyazaki’s own way.

We’ve all been brainwashed by society through that scene! I think that’s what Hayao Miyazaki wanted to convey to us.

Why are the tunnels that were red at first and different colors at the end? 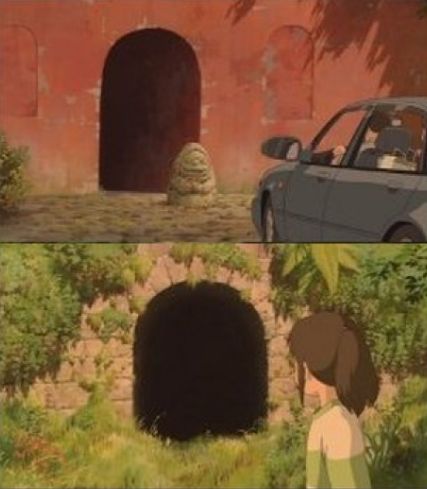 When I first visited, the tunnel was “red”, but in the last scene, the colors had changed.
Why is that?

I think this is another message that people who are brainwashed and those who are not will see things differently.

I think it’s like Hayao Miyazaki’s bitter joke “apology” earlier, telling the audience who noticed the difference in the color of the tunnels that they too have broken free from brainwashing and are changing the way they see things.

The reason why in Chihiro’s original world, only the clip she got from Zeniba remained. 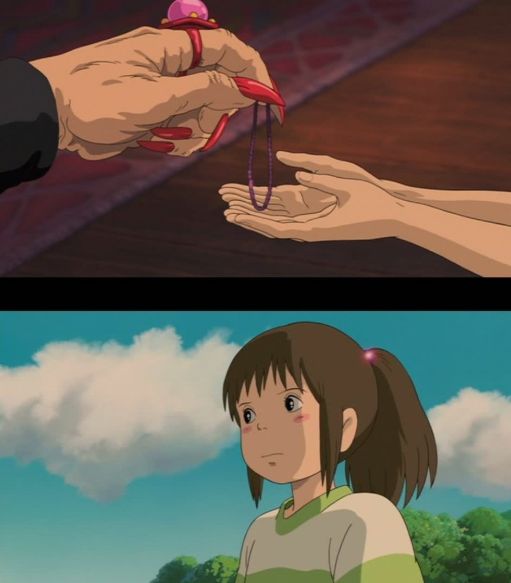 I think this is the message that “what you give from your conscience, it will remain.”

That hair clip was a present to Chihiro by Zeniba, who helped her. even though the story ends and the memory of that magical world fades from Chihiro, only the hair clip remains.

If we prioritize greed and “receiving”, we cannot leave anything behind in the world.
As in “I can’t take it to the grave,” what you get for yourself alone is gone once you’re gone, once your story is over.

However, what you “gave to others” while you are living now will continue to remain in the world.
The same goes for things and money, knowledge and wisdom, as well as the “energy” you give people by helping them or cheering them up.

How much other energy have you given to people while you’re alive? Maybe that’s what makes life worthwhile.

Conclusion：What Hayao Miyazaki wants to convey through Spirited Away

It is my subjective opinion, but I think the theme and message of this film are these four points.